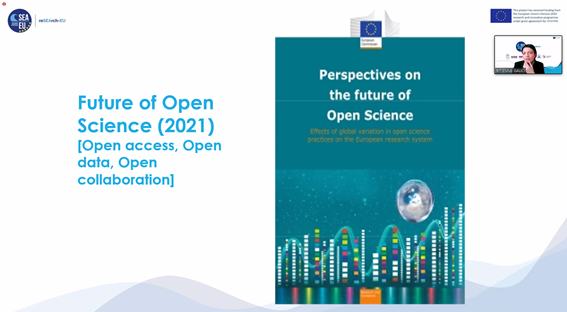 Last Wednesday 27 April Dr Ritienne Gauci (University of Malta) led a virtual lecture on open science theory and practice. The event, though mainly aiming at the Open Science Ambassadors of the SEA-EU Alliance, was open to the public and provided an opportunity for stakeholders external to the SEA-EU Alliance to grasp the ambitions of our consortium in teaching and spreading open science practices across our research community.

During the lecture, Dr Gauci gave a full overview on the concept of open science itself, since the existence of multiple definitions creates a need for understanding of common principles and objectives. Then, the main schools of open science were introduced and their approaches were compared to obtain a clear vision of the current landscape in theories of open science.

This lecture contributed to develop a common understanding of the many concepts surrounding Open Science and that get usually intertwined and confused, such as open access, open data or open policies.  It was also useful to forecast the potential of open science in the future of Europe, raising awareness of the influence of open science policies at the geopolitical level and the goals pursued by the European institutions to compete with global powerhouses such as the United States or China.

The FAIR principles (findability, accessibility, inter-operability and re-usability) were thoroughly explained, and the main challenges that any open science ambassador faces were identified: namely, the lack of awareness among scientists, the lack of incentives from the institutions and the current research assessment frameworks, which still do not encourage the acquisition of open science practices as much as researchers might need. A especial mention was made to the adoption of open science practices in Dr Gauci’s research field: physical geography, a field in which an authentic digital gaming revolution is taking place, and where vast resources are increasingly being offered directly from scientists to the public. Finally, she pointed out to the fact that Open Science does not operate on its own – all the contrary, Open Science is only a part of a bigger landscape, and its role makes real sense when it is intertwined with citizen science and educational activities. Dr Gauci closed the event urging participants to ask themselves not only what Open Science might do for them, but what they can do for Open Science.

You can watch the full event below: