Our origins: the SEA-EU Alliance 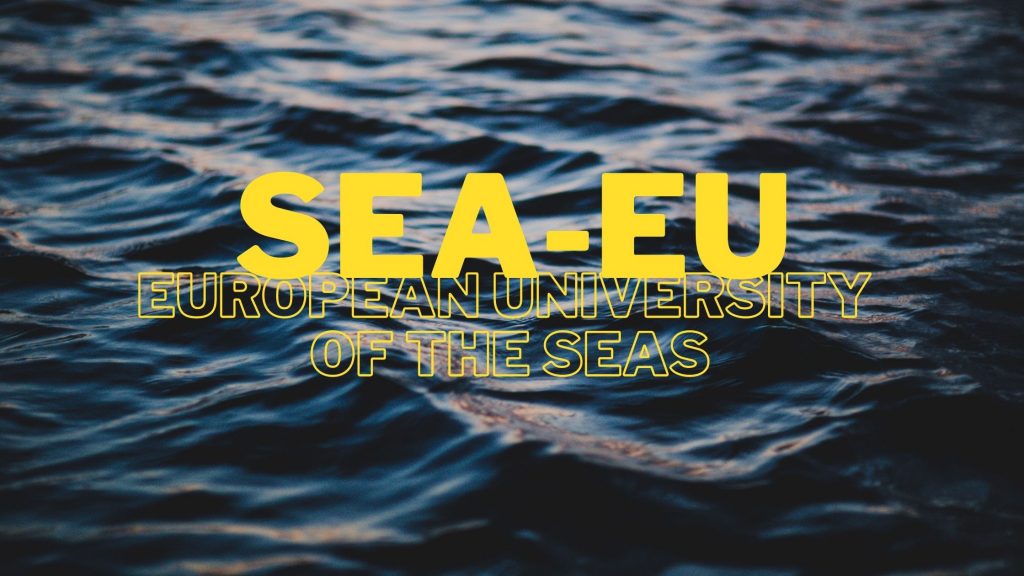 In September 2017 the French president Emmanuel Macron, during his Sorbonne speech on the future of Europe, called for the creation by 2024 of twenty European Universities, building “a network of universities across Europe with programmes that have all their students study abroad and take classes in at least two languages. These European Universities will also be drivers of educational innovation and the quest for excellence.”.

The European Commission proposed this initiative to European Union leaders ahead of the Gothenburg Social Summit in November 2017. In the conclusions adopted in the meeting on 14 December 2017 in Brussels, the European Council called on Member States, the Council and the Commission, in line with their respective competences, to take work forward with a view to “strengthening strategic partnerships across the EU between higher education institutions and encouraging the emergence by 2024 of some twenty ‘European Universities‘, consisting in bottom-up networks of universities across the EU which will enable students to obtain a degree by combining studies in several EU countries and contribute to the international competitiveness of European universities”.

In this context, the former Rector of the University of Cadiz (UCA, Spain), Prof. Eduardo González-Mazo, recruited Prof. José A. Muñoz-Cueto as Rector’s Delegate in May 2018 and gave him the mandate of  launching an alliance of European universities to extend to Europe a successful regional model such as the International Campus of Excellence of the Sea (CEIMAR) coordinated by UCA.

The first contacts to build the European University of the Seas (SEA-EU) took place on 22 June 2018, when a delegation composed by Prof. José A. Muñoz-Cueto, and Prof. Fidel Echevarría, Director of the International Doctoral School in Sea Studies at UCA, visited the Université de Bretagne Occidentale (UBO, Brest, France) presided by Prof. Matthieu Gallou. They were received by a delegation composed by Prof. Yves-Marie Paulet, Vice-president in charge of Maritime Affairs, Prof. Béatrice Thomas-Tual, Vice-president for Europe and International Relations, and Prof. Christian Brosseau, Vice-president for Research and Innovation, and discussed the possibility to work together in the establishment of an alliance of coastal universities and apply together to the first call of the European Universities Initiative 2019. It should be noted that in addition to their common marine/maritime specialization, UCA and UBO have a long history of more than 30 years of successful academic collaboration and  that Cadiz and Brest have been twinned cities since 1986.

From this moment, UCA and UBO established a round of contacts with other potential candidate universities to join the consortium. By fulfilling its motto “In mari via tua” (The sea is your way), the University of Gdańsk (UG, Poland) strives towards the development of the Pomeranian region, whose greatest asset is indeed the sea. On 5 July 2018, Prof. José A. Muñoz-Cueto visited the University of Gdańsk, chaired by the Rector, Prof. Jerzy Piotr Gwizdała, and met Prof. Piotr Stepnowski, Vice-rector for Research and International Cooperation, Prof. Mariusz Sapota, Director of the Institute of Oceanography of Gdańsk, Dr. Adam Jagiello-Rusilowski, Head of the International Office and Dr. Ewa Szymczak, Deputy Dean for Education at the Faculty of Oceanography and Geography at UG. In this meeting, UG representatives expressed their intention to participate  in this joint initiative.

On 10 September 2018, some members of UCA and UBO delegations went to Brussels and met with Vanessa Debiais-Sainton, Head of the Higher Education Unit of the European Commission (DG EACEA). The exchanges were highly constructive, fruitful and encouraging, and the  delegation was able to transmit to the Commission their strategy, the marine/maritime driving force and the geographical balance planned for the alliance. Although the driving force of the alliance was this expertise in marine/maritime disciplines of partner universities, the aim was to draw up an interdisciplinary proposal involving Natural Sciences, Social Sciences, Engineering, Humanities and Health Sciences, and fostering in the long-term a networking of the universities as a whole.

The insularity of Malta and its important geopolitical position in the Mediterranean region, its maritime-related cultural heritage, the undergraduate and postgraduate teaching offer and the research activity developed in marine/maritime disciplines at different Faculties and Institutes of the University of Malta (UM), made this university an excellent partner candidate to join the growing consortium. Thus, the Spanish and French core group contacted Prof. Alfred Vella, Rector of UM, and visited Malta on 15 October 2018 to meet Prof. Godfrey Baldacchino, Pro-rector for International Development and Quality Assurance, Prof. Aldo Drago, specialist in Marine Oceanography, Prof. Claire de Marco, leader of the Maritime Cluster and Victoria Gauci, Acting Deputy Director of the International Office at UM. From the first contact, the UM representatives manifested their commitment with the alliance and their availability to work side by side with other partners in the preparation of a successful proposal.

The focus of an important part of education and research in oceanography and fishing, island and coastal economy, Adriatic tourism, maritime law, nautical science, naval architecture, and a range of other specific disciplines related to their strong Adriatic/Mediterranean orientation, were considered important reasons to incorporate the University of Split (UNIST, Croatia) in this exciting adventure. After some email communications, a Spanish, French and Polish delegation represented by Jose A. Muñoz-Cueto (UCA), Fidel Echevarría (UCA), Beatrice Thomas-Tual (UBO), Piotr Stepnowski (UG) and Kamila Chomicz Sokołowska, Head of the International Cooperation Office (UG) conducted a visit to the University of Split (UNIST, Croatia) on 22 October 2018.

Kiel University (CAU, Germany) is dedicated to research-based teaching and learning, and marine science represents one of its four dynamic priority research areas. The Future Ocean Network is an association of CAU researchers, centred at the Kiel Marine Science (KMS), who as successors to the “Future Ocean” Cluster of Excellence, are jointly implementing research projects that contribute to the sustainable use of ocean resources on an interdisciplinary and cross-institutional basis. Contacted by UBO, which had strong relationship with CAU through the Erasmus+ programme, but also because Brest and Kiel are twinned cities, CAU was the last partner to join the European University of the Seas.

After that, a consortium meeting took place in Brussels on 18 and 19 December 2018, with 17 participants from the University of Cadiz, Université de Bretagne Occidentale, Kiel University, University of Gdańsk, University of Split and University of Malta. In these sessions, the contents of Work Packages (WPs) were discussed and precisely defined, and the distribution of responsibilities, collaborations between partners in the development of WPs and division of work for the writing of different parts of the proposal were agreed, as well as the budget distribution. The consortium met Wim Gabriels, as representative of ESN in Brussels, and proposed that ESN should join the project as associated partner, through the participation of local ESN committees from each university.

On 19 December 2018 the six partners signed the Declaration Paper on the Establishment of the European University of the Seas (SEA-EU), in the presence of Andres Contreras and Cristina Galache, Counsellors for Education at the Permanent Representation of Spain to the European Union, and Lucía Sirera, from  the European Office of the Conference of Rectors of Spanish Universities (CRUE).

A final meeting was held on 24-25 January 2019 in Cadiz (Spain) as coordinating institution, chaired by the former Rector of UCA, Prof. Eduardo González-Mazo, permitting the six partner universities to share their final reflections and work in the last steps of the proposal. The call for proposals closed on 28 February 2019 at 12:00 (noon Brussels time).

The results of the 2019 call were published on 26 June 2019. The EACEA received 54 eligible applications for this call, and the first 17 European University alliances involving 114 higher education institutions from 24 Member States were selected, based on the recommendations of an Evaluation Committee assisted by external experts. One of the Alliances selected was the European University of the Seas (SEA-EU), with reference no. 612468-EPP-1-2019-1-ES-EPPKA2-EUR-UNIV, and  after the signature of the Grant Agreement, this exciting project started its journey on 1st October 2019.